Access to sufficient water for agriculture and farming is a significant issue for many communities across the Pacific Islands, with some tackling this issue by growing climate change ready crops, supported by Pacific research and knowledge exchanges.

The EU-APP is involved in various multi-partner, climate-ready crop projects in FSM including community based gardens, research to pilot test the resilience of varieties of cassava, and taro breeding against Taro Leaf Blight (TLB) which is present in FSM and Palau.

Ensuring information about such Community Supported Agriculture (CSA) and climate change initiatives is shared and replicated by agriculture extension officers, farmers and others in the sector was the focus of a workshop held in Pohnpei, FSM, from 17-21 October 2016. The workshop, Capacity Development Support for Agriculture Policy, Research and Extension Services through Applied Knowledge Management Tools and Approaches, was led by the FSM Department of Resources and Development’s Agriculture Division, in partnership with SPC and the Technical Centre for Agricultural and Rural Cooperation (CTA).

“We take it for granted that Pohnpei has an abundance of water but now we have these water issues - generally we are not aware of climate change here until people start talking about it,” Pohsoain Village Chief, Mr Herman Semes, told the 40 workshop participants from FSM, Palau and Marshall Islands who visited the village, in Wone Community.

While the village plans solutions to access more water, residents of Pohsoain and other communities are also growing climate-ready crops including cassava, taro, yam and breadfruit, as well as crop varieties bred to be more climate resilient, such as sweet potato and banana varieties. 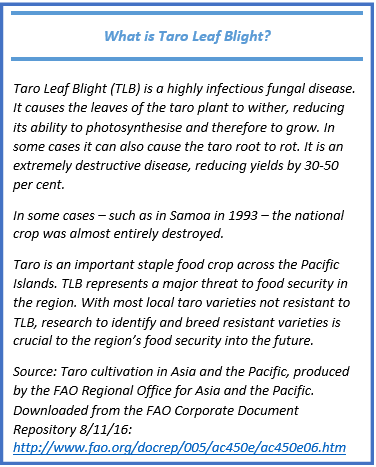 To further support farmers dealing with the effects of climate change, research is being conducted in Pohnpei to test the resilience of cassava, and to cross-breed varieties of taro for Taro Leaf Blight (TLB) resistance. Nine varieties of cassava are being tested in a trial plot, alongside 11 taro varieties for TLB resistance.

“This is the first time FSM’s varieties of cassava and taro have been collected and are to be documented and, in addition, we’re also going to include introduced varieties from overseas to test and develop for climate readiness and identify crops varieties best suited to the North Pacific,” said Mr Poasa Nauluvula, SPC APP Participatory Extension Advisor. “This is very important, for example in Samoa in the late 1990s the non-resistant varieties of taro were decimated by the TLB disease, and we don’t want that to happen again in the Pacific,” Mr Nauluvula said.

According to Dr Nat Tuivavalagi, Agronomy Researcher at the College of Micronesia, these experiments could prove valuable in the future to assist farmer’s better deal with the negative impacts of climate change.

“We may find that there is a local cassava or taro variety that can better tolerate drought or saline soil conditions,” Dr Tuivavalagi said.

The two-year cassava research project will enable researchers to gain a better understanding of cassava varieties that exist in Pohnpei and they will also be exploring whether there are pruning methods that could increase cassava productivity for the benefit of local farmers.

The taro project aims to identify and breed varieties of taro that are resistant to Taro Leaf Blight (TLB), a major food security threat in the Pacific Islands and Asia. The method is to initially work on trial plots then expand to promote on-farm taro breeding and selection for TLB resistance in the North Pacific, in particular Pohnpei and the other three States of FSM.

The taro project has two key components, to characterize and document local taro varieties and breeding work to determine TLB resistant or tolerant cultivars via the formation of a breeders’ group involving members from various agriculture workplaces including farmers.

“Another very important benefit of the project is that it has provided a training ground for various groups of people including high school students, college students, COM-FSM college staff, Agriculture Department staff, and farmers” Dr Tuivavalagi said.