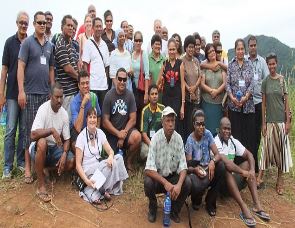 Following its 2009 seminar on media and agricultural and rural development, CTA has launched its new Media Programme, choosing to host the first Media Planning Seminar in the Pacific. The meeting was organized by the Secretariat of the Pacific Community (SPC) with support from CTA and the German development organization, GTZ.

The Media Planning Seminar for the Pacific region took place from 10-14 May 2010, in Nadi, Fiji. During the Opening Ceremony, the Minister of Environment, Local Government, Urban Development and Housing, Col. Samuela Saumatua, made a call to the participants to put people at the centre of media planning efforts if sustainable development was to be achieved in the region.

The more than 40 participants, who included journalists, media proprietors, agricultural specialists, scientists and academics came from:

Partnerships with Media key to Development

Ms Oumy Ndiaye, Manager of the Communications Services Department at CTA, said that food insecurity and poverty are two of the major problems that can be better handled through effective partnerships between different stakeholders including media, non-governmental organisations and the government. She outlined the particular challenges faced by the Pacific community in agriculture and rural development, including the cost of communicating over vast distances in the Pacific and the lack of resources allocated to agriculture. She further noted: 'The Pacific seminar is the first to take place because the region has been particularly proactive in this area. Similar seminars will follow for Africa and the Caribbean'.

In his keynote address, Dr Kenneth Cokanasiga, Officer in Charge of the SPC’s Suva Office, urged participants to tailor communication strategies to local conditions. Said Cokanasiga, “There are so many variables of a human, cultural and physical nature that a communication plan, having worked for a particular project in one area, can never be transferred lock, stock, and barrel to another”. He pledged SPC total support to media efforts in the region. “We at SPC recognize and fully support the important role that effective communication has in our development work with the various communities of the Pacific region.

For more on the SPC, visit: http://www.spc.int/