Importance of agricultural biodiversity in the Pacific 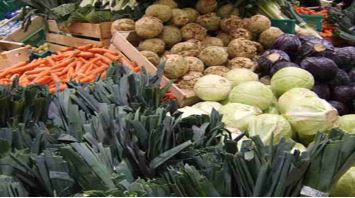 20 MAY 2010 SUVA (SPC) ----What is agricultural biodiversity? We often hear about the word “biodiversity”, and when we do, we think of forests and inspiring species, such as the gorilla and the panda. The global media highlight the threats to some of these incredible species and thankfully also tell us when a new species is found.

However, it would be wrong to define agricultural biodiversity as just the plants and animals that we eat - its value stretches beyond these crop and animal species, and includes all forms of life directly relevant to agriculture, so not just crops and livestock but also organisms such as soil fauna, weeds, pests and predators.

A closer look at agricultural biodiversity highlights the huge role it plays in our lives, and why we need to ensure we are conserving this biodiversity and sustainably using it. Agriculture occupies more than one-third of the land in most countries of the world. If these agricultural lands are managed sustainably, they contribute to wider ecosystem functions, such as the maintenance of water quality, and carbon sequestration.

A range of populations are needed by agriculture, such as pollinators (bees and such like) and beneficial predators. These populations must have habitat diversity to survive. Agriculture therefore provides incentives to preserve areas, which support these populations. If we do not ensure there are habitats for these beneficial insects to prosper in, then agricultural production could be negatively affected. Essential functions such as nutrient cycling, decomposition of organic matter, pest and disease control and pollination are all maintained by a wide range of populations in and near agricultural ecosystems. Increased nutrient availability and improved water – all helping us to produce better and more food - can be the result of building on and enhancing these functions.

Moving on to agricultural productivity to have a closer look at how biodiversity helps food production. Conservation and management of broad-based genetic diversity has been supporting the improvement of agriculture for 10,000 years. It is this broad base of diversity that has enabled agriculture to sustain increasing populations over the years. At the same time, this diversity has provided the resilience within agricultural ecosystems, so they have the capacity to recover from environmental stress and to evolve. This capacity to evolve has given us the diversity which can solve pest and disease problems.

We have in the Pacific a perfect example of “diversity to the rescue”. In Samoa in 1993 taro production was severely affected by the fungus disease, taro leaf blight (TLB). Taro was the main staple food in Samoa as well as a lucrative cash crop, with exports worth ST $15 million annually. TLB wiped out the entire taro industry in a matter of months, raising food security concerns, and significantly reducing export revenues, which affected the nation’s foreign reserves. Across the food sector, taro was soon replaced by less nutritious starchy staples in the form of instant noodles and rice. The disease spread rapidly throughout the country severely affecting all local varieties.

However, its impact was the most severe on the variety Niue, which was unfortunate as this was the variety of choice for commercial production. The area planted with taro Niue at the time was extremely large and effectively ensured a monocrop situation comprising a highly susceptible variety. For a while it looked like taro could no longer be the food of choice in Samoa. However, Samoa managed to revive its taro production by introducing new varieties from outside of Samoa. A variety from the Philippines proved to be resistant to TLB, as did a variety from Palau.

These varieties, and other varieties from outside Samoa, formed the basis of a breeding programme for TLB-resistant varieties. Without the input of these new varieties, that is agricultural biodiversity, Samoa would still be without its taro, a crop not only valued as a food crop but an essential part of Samoan culture.

The need for diversity becomes far more apparent when we think of how agriculture will adapt to climate change.

The negative impact of climate change on agriculture, and thus on the production of food, could well place at risk all other efforts to mitigate and adapt to new climate conditions. Farmers will come across problems never before experienced: far greater weather variability, increases in average temperatures, increases in the numbers of extremely hot days, shorter growing seasons, far greater moisture stress, added salinity from salt water incursion and irrigation systems, and new combinations of pests and diseases.

Agriculture has to adapt to this wide range of challenges without any real idea of exactly what the weather pattern will be – unpredictability is perhaps the most demanding of the challenges. The Pacific is particularly vulnerable in this respect in that our food security is dependent on crops that do not get the research attention of crops such as wheat and maize. With these more global crops, there is significant funding being channelled to international research institutes to determine the impact of climate change through climate modelling and also in both conventional and non-conventional breeding programmes. To some extent we are on our own and more reliant on the traditional practices that has sustained agriculture in the Pacific for generations, and those traditional practices have centred round diversity.

The only solution for adaptation is agricultural biodiversity – this biodiversity, in particular crop diversity, is the raw material for adaptation, which will enable farmers to continue to produce food. There is no single characteristic, no one climate change gene that can ensure adaptation across the board. In the Pacific we have significant crop diversity, albeit in some countries more than others. However, through regional sharing mechanisms, such as the regional gene bank at the Secretariat of the Pacific Community (SPC Centre for Pacific Crops and Trees), we can access crop diversity that does not exist in our own country and importantly in our own region.

We have discussed the benefits of agricultural biodiversity to food production and also to the wider ecosystem services. Are there other benefits? Agricultural biodiversity can also improve our health. Obviously the maintenance of water quality is important to our well-being but through choosing what we consume, we can significantly improve our nutritional status, which has beneficial effects on our health. Serious health problems have emerged throughout the Pacific as a result of lifestyle changes. These changes include the trend towards increased consumption of imported foods of poor nutritional quality and at the same time, a neglect of traditional food systems. Rates of diabetes and other non-communicable diseases are escalating, while micronutrient deficiencies, including vitamin A deficiency and anaemia also exist. The presence of both of these types of nutritional disorders has been termed the “double burden of malnutrition”. Growing and consuming local island foods offer an opportunity to improve the nutritional status and health of Pacific communities. Some excellent work conducted by Dr Lois Englberger of the Island Food Community of Pohnpei has clearly shown the nutritional benefits that can be gained by thinking about which variety of banana to eat.

The right choice can greatly increase the level of beta-carotene consumed, and thereby boosting our Vitamin A levels and our general immune system.

In talking about agricultural biodiversity we must not forget the variety of living organisms that maintain our soils. Using agricultural practices that build on existing ecological processes such as soil conservation, and biological pest control, and utilizing systems that include crop and livestock diversity, can reduce the need for fertilizers and pesticides, thereby preserving the health of the agricultural ecosystem, and ensuring food production into the future.

When you think about the benefits that agricultural biodiversity can bring at the individual, local, national and regional level, and beyond that globally, every effort has to be made to promote its conservation, and importantly its utilization. At the local level, the diversity found within a home garden can be increased through growing a range of crops and also not the same variety of one crop. With sweet potato, for example, there is the very tasty orange fleshed variety that provides health benefits with every bite. Growing different crops and varieties ensures a diverse healthy diet, and food on the table regardless of the weather patterns. At the national level, using practices that safeguard and sustainably utilize agricultural biodiversity will secure food production, and at the same time, support a healthy population. Surely there cannot be anything more important than agricultural biodiversity, a “commodity” that sustains life?

Meanwhile, the Centre for Pacific Crops and Trees (CePaCT) has relocated to a new facility in Narere – SPC member countries now have a modern gene bank built to international standard. CePaCT has been in operation since 1998 when it first started activities as the Regional Germplasm Centre, and as such has significant technical expertise in plant genetic resources. CePaCT staffs have been busy since the beginning of the year organising the move to the new building. The whole process has been a delicate operation involving transporting plant cultures, laminar flow cupboards, cryopreservation tanks, microscopes, and various virus testing tool kits and lab equipment.

CePaCT’s move to a more modern facility with larger laboratory and office space is a significant event given that the UN has declared 2010 the International Year of Biodiversity. The new facility gives CePaCT the opportunity to expand its collections, and distribute more planting material. The demand for planting material continues to increase. CePaCT intends to investigate the use of a bioreactor system to assist in meeting this demand and ensuring both traditional and improved varieties reach the farmers' fields

The new facility also enables the research programme within CePaCT to increase. A new research project has just started in collaboration with SOPAC and USP and funded through the AusAID International Climate Change Adaptation Initiative (ICCAI) investigating salt tolerance in swamp taro. Within the coming months a similar collaboration with USP will see a project on pandanus diversity established in CePaCT. These new research programmes are just two components of a larger climate change adaptation programme within CePaCT funded through ICCAI, which includes the building up of the climate ready collection and its evaluation throughout the region.

Conservation remains the core business of the centre, with priority given to the region’s staple crops. CePaCT is acknowledged as the global centre for taro diversity. This collection is the largest in vitro taro collection globally, consisting of over 850 varieties from Pacific and Asian countries, including improved lines obtained through collaboration with breeding programmes in Papua New Guinea and Samoa. The importance of this taro collection and also the yam collection held at CePaCT to food security has been recognised globally with the recent signing of a long-term agreement with the Global Crop Diversity Trust providing some long-term funding support for these collections. This is the first long-term grant provided by the Trust to a collection outside of the Consultative Group for International Agricultural Research (CGIAR). CePaCT is headed by Dr Mary Taylor, with Ms Valerie Tuia as the CePaCT Curator. The outputs of CePaCT are the result of a team of qualified and dedicated staff...PNS (ENDS)

For more information on agricultural biodiversity, please contact Dr Mary Taylor, Adviser, Plant Genetics Resources and Manager, Centre for Pacific Crops and Trees (CePaCT):
This email address is being protected from spambots. You need JavaScript enabled to view it.