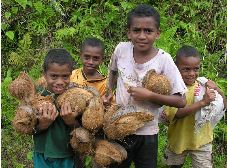 These depend on the possibilities they see in terms of work, wages and livelihoods. A thorough survey has shown what young people in the Pacific think, and different efforts are already showing positive results.

The important role which young people play in farming was recently highlighted in a new study by a group of eminent experts and representatives from the world’s major agricultural organisations to identify the top 100 questions of importance to the future of global agriculture (Pretty et al., 2010).

Among the questions asked was “what steps need to be taken to encourage young people to study agricultural science?” An important question, but surely only part of a larger question we should all be thinking about and acting upon. If we are looking at “the future of global agriculture”, the question needs to be framed differently. What we need to ask is: what is the capacity of farming to attract and absorb young people, to provide them with fulfilling work, a decent wage and a rewarding career and livelihood?

What do people in the Pacific think?

In 2008, the Ministers of Agriculture in the region asked the Secretariat of the Pacific Community (SPC) and its partners to explore this key question. It was already known that farming is often regarded as a fall-back option – something to do if you don’t find anything else.

A commonly heard opinion in the Fiji islands is that “from a young age we have been programmed to think that a job in town or a job in an office is the ultimate aim”. Yet in the Pacific, as elsewhere, young people struggle to find formal employment when they leave the education system. High youth unemployment results in increasing migration, stretching already limited infrastructure and services, increasing social problems and unrest.

So as a first step, the Pacific Agriculture and Forestry Policy Network (PAFPNet), hosted by the SPC, carried out a survey in November 2009 of young people in Fiji, Tonga and Kiribati to explore their relationship with farming and see what needed to be done to encourage, support and empower young people to seek a career in farming.

The survey found that many young people are engaged in farming activities, making a significant contribution to the family’s labour and food security. However, young people need support if they are to see farming as a career option: they need to be able to develop appropriate financial and business skills, be empowered to access land and credit and have control over the resulting financial returns from their activities. This reflects some of the objectives already adopted by MORDI, the Mainstreaming of Rural Development Innovations Programme.

While a significant number of young people are involved in independent agricultural activities and providing agricultural support to their families, it was also noted that young people learn and benefit from communal agriculture, either through the local traditional systems or as members of youth groups. Such communal endeavours help the youth to build up self-esteem and a sense of community. The emphasis that young people place on the importance of their immediate support groups – family, community, church and school – highlights the need to improve the institutional “enabling environment” provided by these groups if young people are to develop as agricultural entrepreneurs.

Advantages of a participatory extension system

DSAP, or Development of Sustainable Agriculture in the Pacific, is a programme that ran until 2010 in 16 countries. Following farmer-led approaches and modelled by what is known as Participatory Technology Development (or PTD), the programme worked closely with farmers and rural communities to identify priority problems and appropriate solutions. After a series of consultations, DSAP staff worked with farmers and communities to test and evaluate innovative ideas, assisting them in the process of monitoring and evaluating their work. DSAP represented a major collaboration between the national agricultural research and extension services of different countries, various NGOs, rural communities and farmers. While its focus on local innovations has been described as successful, its main results have been a major re-alignment of the regional extension services, all of which have become more sensitive to the needs and problems of farming communities and now pay special attention to vulnerable groups, such as youth. The experiences of the DSAP project have been documented in two manuals, “A participatory toolkit for sustainable agriculture programmes in the Pacific” and “Case studies – Lessons from the field”.

The survey attempted to determine the conditions that are important for the success and sustainability of youth development programmes. The responses indicated that key factors include ensuring that young people are actively involved in the design, implementation, and monitoring and evaluation of programmes, and that their needs are identified and addressed. Another vital step is providing a forum within agriculture programmes for young people to discuss their needs with their families and community elders. This helps increase awareness and understanding among the older generations about how they, together with others, can support young people starting up agricultural ventures.

Although the usual factors of better access to credit, more frequent visits by extension officers and access to affordable agricultural inputs were raised as key constraints facing young people, a positive environment emerged as an even more important factor. This suggests that agricultural extension services need to broaden their traditional horizons if they are to better support Pacific youth in agricultural activities. This will involve working with communities and partners to carry out participatory appraisals of youth needs, and providing trainings aiming at financial literacy, confidence building and empowerment.

A key element of this “enabling environment” is the need to reverse the often negative attitudes to farming embedded at an early age during school. Many young people commented that the school system often contributes to instilling negative perceptions by using agricultural activities as a means of punishment or discipline, or by impressing on young people that agriculture is less worthwhile pursuing than other subjects. Clearly, schools can play a role in instilling more positive attitudes towards agriculture, including being involved in extension work. This is paramount to reversing such attitudes and encouraging young people back into farming.

Both the DSAP and MORDI programmes have allowed the voice of Pacific youth to be heard, listened to and acted upon – with youth being the main drivers of the process. Both programmes followed participatory approaches, helping young people have a prominent role in different projects and interventions which were designed and carried out by young people themselves.

The results have been clearer in communities such as those in the districts of Wailevu and Kubulau (in Vanua Levu, Fiji), where the traditional hierarchical village structure means that little importance is given to the opinions of youth. This situation changed somewhat after a series of Participatory Learning and Planning consultations, which helped create safe spaces for youth to articulate their feelings about and ideas for the future. The approach involved arranging separate consultations with groups of men, women and youth.

The village leaders and elders were so impressed with the proposals of the youth that they were incorporated into larger village development plans. Village youth have used the many project management skills that they learned from the MORDI programme, including proposal writing, to successfully design, implement and monitor a range of projects co-financed by MORDI and by funds raised through youth group activities.

The outcomes of the survey have been used to inform the development of a regional Pacific Youth and Agriculture Strategy, endorsed by the Heads of Agriculture and Forestry Services (HOAFS) and Ministers of Youth in 2010. Together with the positive examples which have already been seen in the region, this is helping define a road map for Pacific countries to encourage better partnerships, policies and programmes that support the active engagement of youth in farming across the region and the nurturing of young agricultural entrepreneurs.