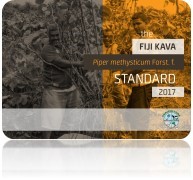 A PAFPNet Update: Strengthening Kava Quality in the Pacific

Kava maybe a brown beverage but for many Pacific farmers, it is indeed gold! Surging export demand for kava in recent years is providing a windfall for many farmers and Pacific economies.

In Fiji, kava exports nearly doubled from F$8.8million in 2015 to F$15.7million in 2017.  In Vanuatu, kava exports amounted to US$3.2m in 2017, almost double the earnings on the previous year.
Securing international markets not only requires consistent supply but consistent quality – quality that meets international standards. For kava, the good news is that there are steps that are being taken by a number of Governments, industry groups and technical partners such as DFATs Pacific Horticultural and Agricultural Market Access Program (PHAMA) and SPC (Intra ACP Agriculture Policy Program) to put in place quality standards, manuals, legislation and training to ensure that the kava industry has a strong base to produce consistent quality. This Note briefly discusses some of this work in Fiji.

About the Kava Plant

Kava is commonly used to refer to the drink made from roots of the Piper methysticum plant. Other names for kava include ʻawa (Hawaiʻi), ʻava (Samoa), yaqona (Fiji), sakau (Pohnpei) and malok or     malogu (parts of Vanuatu). In these countries, the significance of kava is deeply rooted and embedded in culture and way of life. The drink is prepared from the dried, pounded roots (“waka”) and sliced rhizomes (“lewena”) of the kava plant. Its active ingredients are called kavalactones. Kavalactones are responsible for kava root’s calming, anxiolytic, and in some cases euphoric effects.
The chemotype or kavalactone profile is determined by ranking the proportions of six kavalactones from highest to the lowest amount (i.e. in descending order). There are six major kavalactones and their numbering system has been devised to identify them (see Box 1). For a desirable variety, kavalactones must have a chemotype where the first three components are 2, 4 and 6 (in any order).

The Fiji Kava Standard and Fiji Kava Quality Manual
The "Fiji Kava Standard” (2017) provides this information along with other requirements to ensure that kava meets minimum safety standards. These include moisture content (less than 12%), age (at least 3 years), aroma (non-foul smelling), ash (less than 6%) and others.  In addition, kava must comply with international CODEX standards. Any consignment of kava that fails to meet any one of these standards is considered defective.

A second Manual,  the “Fiji Kava Quality Manual” (2017) identifies the range of Fiji kava varieties, how they are distinguished and suggested agronomic methods for cultivation.
A 2014 Survey by the Fiji Market Access Working Group found that  thirteen (13) varieties of kava were grown in Fiji (see Box 2)- all of which were desirable and had chemotypes that made them suitable for consumption in the domestic and export markets.  All these 13 varieties are easily distinguishable from each other by the visibility and colour of lenticels, the lengths of internodes, and general stem colour. The absence of lenticels means that the stem is smoother to touch than other varieties with lenticels. All this information is documented in the Manual.
Anec

Going Forward
The Fiji Government launched these two key documents, the Fiji Kava Standard and Fiji Kava Quality Manual in March 2017. DFAT’s PHAMA program has also helped produce a kava value chain study as well as directly support the Fiji Market Access Working Group. Estimates show that over 21,000 farms in Fiji cultivate kava (AgCensus 2009). This number  is likely to have increased following the rapid escalation in market kava prices.
Over 5,000 individual kava farmers are now registered on an SMS database by the Fiji Crop and Livestock Council with support of SPC. These are significant steps.
Going forward, more work is required at national level to raise awareness and compliance. A Fiji Kava bill that will enforce standards, strengthen compliance and support a structured approach for industry is already in train.
Further work on the agronomy of these thirteen varieties would assist in understanding differences in performance (yield and kava lactone production) in different environments as well as differences in their resistance to stress such as salinity, drought and disease.
For more information on kava work in Fiji, please contact the Fiji Market Access Working Group through This email address is being protected from spambots. You need JavaScript enabled to view it.
Kind Regards
SPC PAFPnet Team